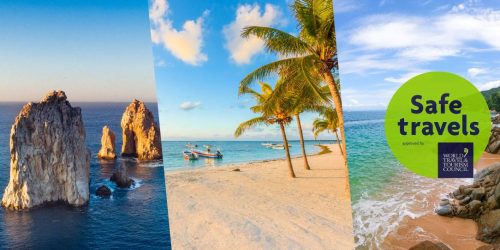 WTTC, which represents the global Travel & Tourism private sector, made history earlier this year when it launched the world’s first ever global safety and hygiene stamp, and today the Safe Travels stamp reached its first major milestone.

The stamp, which was developed in order to help restore confidence in travellers and work to revive an ailing Travel & Tourism sector, is now also being used by many more major holiday destinations such as the Maldives, Bermuda, Namibia, Uganda and Montenegro.

The specially designed stamp enables travellers to recognise destinations around the world which have adopted health and hygiene global standardised protocols – so they can experience ‘Safe Travels’.

The launch of global protocols to recover the Travel & Tourism sector have been embraced by over 200 CEO’s including some of the world’s major tourism groups.

Gloria Guevara, WTTC President & CEO, said: “We are delighted to see our innovative initiative is proving such a great success and is being used by destinations from all corners of the globe.

“The 100 destinations which now proudly use the stamp are working together to help rebuild consumer confidence worldwide. We welcome the Philippines, an incredible destination and home to some of the world’s most beautiful islands, as our 100th destination, as well as other popular destinations around the globe such as Turkey, Egypt, Indonesia and Kenya.

“As the stamp continues to gain in popularity, travellers will more easily be able to recognise the destinations worldwide which have adopted the new set of global protocols, encouraging the return of ‘Safe Travels’ around the world.

“The success of the Safe Travels stamp shows its importance not only to countries and destinations, but also to travellers and the 330 million people around the world who work in and depend on a thriving the Travel & Tourism sector.”

“I wish to thank WTTC for recognising our efforts of putting in place policies concerning health, safety and sanitation protocols, which we have benchmarked with global best practices and aligned with WTTC’s standards.

“The Safe Travels stamp will further encourage our stakeholders to adhere to health and safety standards, and will also help us rebuild traveller confidence, so we can restart tourism and preserve and sustain jobs.”

The widespread adoption of the stamp demonstrates that WTTC and all its Members from around the world have the safety and hygiene of travellers as their top priority.

The protocols follow guidelines from the World Health Organisation (WHO) and the Centre for Disease Control and Prevention (CDC), as well as considering best practices from WTTC’s members.

Evidence from WTTC’s Crisis Readiness report, which looked at 90 different types of crises in the last 20 years, highlights the importance of public-private cooperation and the implementation of standardised protocols.

According to WTTC’s 2020 Economic Impact Report, during 2019, Travel & Tourism was responsible for one in 10 jobs (330 million total), making a 10.3% contribution to global GDP and generating one in four of all new jobs.