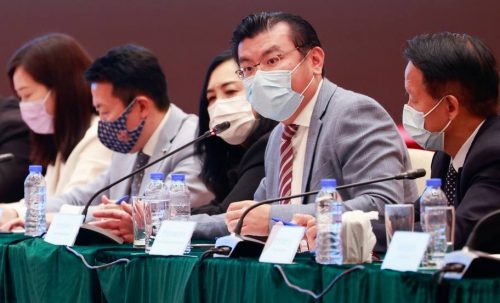 Macao, Macao SAR, May 22, 2021 / TRAVELINDEX / The Tourism Development Committee (CDT, on its Portuguese acronym) convened the first Plenary Meeting of 2021 on May 18, presided over by Secretary for Economy and Finance of the Macao Special Administrative Region Government and Committee Chairperson, Lei Wai Nong. Various CDT members raised opinions and suggestions on Macao’s tourism development as well as tourism and economic recovery.

Secretary Lei Wai Nong stated that the COVID-19 pandemic has posed immense challenges for the SAR Government and society of Macao. But thanks to the efforts of different sectors, Macao has attained progressive achievement towards tourism recovery at the stage. He expressed gratitude to the travel trade for their continuous great support to the administration of the Macao SAR Government, as well as for their concerted efforts and contribution to the city’s fight against the pandemic and march towards economic recovery.

He indicated that with the implementation of the scheme “to expand visitor source, revive the economy and secure employment opportunities” and the “2021 Scheme for Employment Security, Economic Stabilization and Care for Residents’ Livelihood”, as well as the work of vaccination in progress, Macao’s tourism and economy is expected to grow steadily.

Secretary Lei emphasized that the SAR Government will continue to collect opinions for the work to more systemically deepen cross-sector integration of “tourism +”, elevate competitiveness of Macao’s tourism industry and steer other emerging industries towards growth. At the same time, the Government will make strenuous efforts to expand the spectrum of visitor source, spur economic revival and secure the labour market.

He hopes that the trade can capitalize on the peak period of summer holidays to strengthen “tourism +” synergy and promote special offers, conveying warm hospitality to visitors and extending their length of stay so that the tourism industry can be revived to a greater extent.

Deputy Directors of Macao Government Tourism Office (MGTO), Cheng Wai Tong and Ricky Hoi, presented an overview of Macao’s current tourism situation, as well as the latest progress of tourism recovery. Provisional figures revealed that in the first four months of 2021, average daily visitor arrivals and average hotel occupancy rate both showed an upward trend in general. The average daily volume of visitor arrivals rose from 18,000 in January 2021 to 26,600 in April 2021. In terms of average hotel occupancy rate, the average rate of January was 41% while that of April rose to 60.1%. The average hotel occupancy rate throughout the 1st May Labour Day Holidays (1 – 5 May) even reached 83.2%, a surge of 23.1 percentage points from April. The average of length of visitors’ stay from January to April 2021 was 1.7 days (year-on-year rise of 0.2 day) whereas the average length of stay of overnight-stay visitors was 3 days (year-on-year rise of 0.3 day).

As of the end of April 2021, through the scheme “to expand visitor source, revive the economy and secure employment opportunities”, the SAR Government distributed 3.62 million cash vouchers with a total of RMB 40.29 million cashed, which drove a transaction amount of RMB 888 million. 1.96 million hotel coupons were distributed, with 350,812 room nights redeemed.

To spur tourism revival, the SAR Government has unfolded a series of major initiatives including the “Stay, Dine and See Macao” project, promotions in partnership with e-commerce companies, joint promotions for tourism + MICE, the series of mega promotional events entitled “Macao Week”, etc. In addition, there are the Macao Highlight Tours newly launched by the travel trade, the Macao Grand Prix Museum in operation as well as community tourism, among others.

In terms of destination promotion, Macao Government Tourism Office (MGTO) organized the series of “Macao Weeks” in Hangzhou and Nanjing this year to raise Macao’s profile as a healthy, safe and quality destination and bolster travelers’ confidence. Similar mega promotional events are planned to be staged in various other cities in the Mainland in the upcoming future. Furthermore, MGTO will join hands with Macao Trade and Investment Promotion Institute to organize Macao tourism and MICE presentation seminars regularly in the Mainland to foster trade exchange and expand business opportunities between Macao and the Mainland.