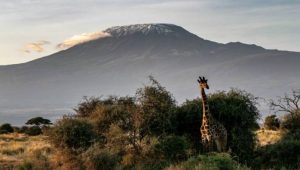 Mombasa (Kenya) – December 9, 2019 (travelindex.com) – Alain St.Ange, the Seychelles former Minister of Tourism, Civil Aviation, Ports and Marine who is in Mombasa as a delegate invited for Routes Africa 2019 took to the stage yesterday along side Tony Griffith, the Senior Vice President Consulting at ASM, and as usual he spoke from the heart making points for the betterment of aviation and tourism.

The need for political will was highlighted and for the continent’s accredited bodies to stand by the side of African Member States starting with the African Union, IATA AFRICA and AFRAA.

St.Ange’s points were discussed overnight and earlier this morning in a meeting with Steven Small, the Director of Routes, the point was made and agreed that a meeting is needed between Routes, African Union (AU), IATA Africa and AFRAA.

Africa needs a coordination planning meeting in its opening of the air space, routes development and in so doing help tourism to rewrite its own narrative for Africa by Africa.

Steven Small of Routes has said he sees the need for such a meeting to be called and plans to followup.

Alain St.Ange met the press in Nairobi as he was heading for Routes Africa in Mombasa.

Alain St.Ange, the Seychelles former Tourism, Civil Aviation, Ports and Marine Minister was in Nairobi before heading to Mombasa for Routes Africa 2019.

St.Ange, who is now a much respected and sought after speaker for tourism and aviation forums and conferences stopped in Nairobi primarily to meet tourism leaders he deals with through his tourism consultancy business (Saint Ange Tourism Consultancy) from which he issues his weekly tourism report.

After his meetings on Friday some Kenyan press personalities caught up with him at Hilton Nairobi to better understand his tenacity and dedication to tourism.

“I am honoured to again be invited to Routes Africa to sit on a panel of experts in the field of aviation. This subject remains the catalyst for tourism destinations because without a good aviation network tourism as an industry will struggle. This is why every helping hand is important and Africa needs to be relooking at its air routes to ensure better coordinated links” said St.Ange.

The former Minister was also quizzed on tourism in the Indian Ocean as well as politics in Seychelles where he leads the One Seychelles political party.

“Political developments in Seychelles is intensifying day by day as Presidential elections are due in the latter part of 2020. Will it be just a Presidential poll or will the incumbent President call a General Election is anyone’s guess but I can say the One Seychelles as a political party is ready to contest the elections as and when they are called” said St.Ange.

Alain St.Ange will be in Mombasa for the three coming days as one if the invited Routes Africa delegate.